Dogs are one of the most common pets in Queensland households, but cats are close behind. Cats are underrated as family pets, often because they're seen as aloof and independent. People who say cats can't be friendly pets haven't met a Ragdoll!

Ragdoll cats are easy to recognise by their distinct features: big blue eyes, medium-long, soft coat and coat patterns — bi-color, van, mitted or colourpoint. They are one of the largest cat breeds (slightly larger than the Maine Coon) weigh between 15 and 20 pounds, and females between 10 and 15 pounds. Their regal looks and soft coat are two desirable features, but they just keep getting better and better. They are considered one of the friendliest, most playful cat breeds; you can even teach the Ragdoll to play fetch! They thrive on human companionship and will flop into your lap or crawl into bed with you at night, for love. They're docile and gentle, able to be picked up and cuddled by their human friends. In fact, the breed supposedly got its name because early litters of the docile, friendly cat became limp and floppy like rag dolls when they were picked up, a characteristic so unusual that bizarre and interesting stories have cropped up over the years to explain the unique behaviour. 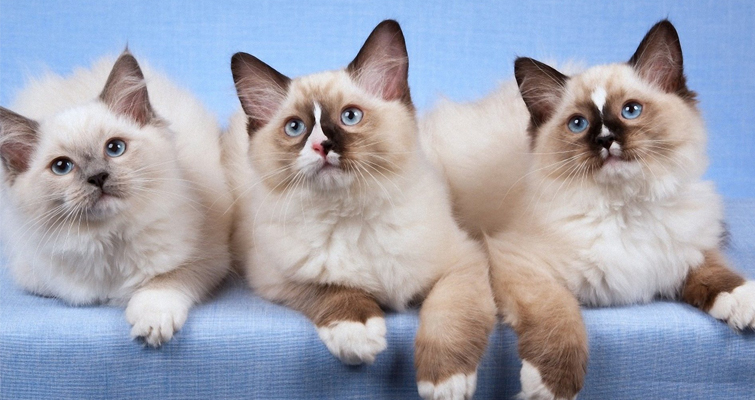 In 1966, a cat named Josephine was bred with another cat and created the first 'Ragdoll' litter, that is why all Ragdolls are called "the daughters of Josephine". To explain the docile and floppy behaviour of the cats, stories had been spread through the last 60 years. One story says that Josephine was hit by a car and in the accident gained pain-immunity super powers! These pain-immunity powers caused her to be laid back, unbothered and, as a result, as ragdoll-ish as the name. Though the story is unlikely, the relaxed, floppy characteristic has survived through years of breeding. Their progenitor, the Burmese, are responsible for many of the best features, including their patience, compassion and their regal looks. They are also descended from Birman and Persian cats. These cats were so loved in the late 60s that two seperate fan clubs, the International Ragdoll Cat Association (IRCA) and  the Ragdoll Fanciers Club International (RFCI), emerged to maintain the integrity and quality of Ragdoll cats.

There is now over 300 reputable breeders internationally and they are still struggling to meet demand. Reputable breeders must follow ethical, breeding quality and procedure standards in their state or federal levels. Cat breeders who join an association or certification must meet the standards and requirements set out by the organisation. In Queensland, the Queensland Feline Association Inc.  QFA has a code of ethics

and rules and regulations (by-laws, code of conduct and a constitution). A reputable breeder aligned with QFA is Tipasheena, a local Noosa breeder. You can learn about Tipasheena and their waiting time for kittens. You can check rescue organisations like SCARS and the RSPCA if you'd rather adopt or skip extensive wait times and keep an eye out for Ragdoll cats or similar family-friendly breeds like Persians and Burmese.

Bella and Boots has a cat-specific food pack, the House Lionel Blend, to keep your pet energised, healthy and satisfied. You can read more about the benefits of our food packs for your furry friends in the product descriptions. If your dog or cat has tried our Bella & Boots packs and enjoyed them, we’d love to know. You can tag us on social media @bella_nboots or fill out our Pet of the Fortnight form here to win a 700g food pack.